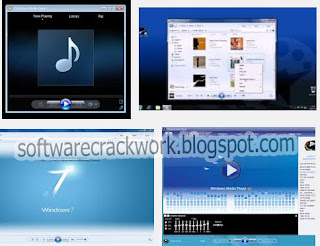 Windows Media Player is available for the Windows, Windows Mobile, and Mac operating systems. Learn more about the Player based on the operating system that you have.
Designed by media lovers, for media lovers. Windows Media Player 12 plays more music and video than ever—including Flip Video and unprotected songs from your iTunes library!
Windows Media Player 12 is the latest version of Microsoft's official media player, which comes bundled with Windows 7. It's not that different from version 11 – except for some slight changes in design – but if, like me, you haven't used Windows Media Player for a while, you'll be surprised to find a full multimedia suite with which you can not only listen to your favorite bands, but also view pictures, watch videos, rip and burn CDs, sync with mobile devices and even buy music online.
Windows Media Player 12 maintains the same design of the previous version, featuring only small changes in color (now it's clearer and brighter) and toolbar layout. The program now makes a clear difference between the Library mode – which shows the Library contents and tools - and the Now Playing mode, where you can see the currently active song, video or playlist, along with visualization effects.
Features:
Plays more media...
Windows Media Player 12 has built-in support for many popular audio and video formats—including 3GP, AAC, AVCHD, MPEG-4, WMV, and WMA. It also supports most AVI, DivX, MOV, and Xvid files.

...in more places
The new Play To feature streams music and video to other PCs running Windows 7 or compatible devices around the home. With Remote Media Streaming, you can enjoy music or videos on your home PC from the road.

New playback modes
The new Now Playing mode is a study in minimalism: It shows only the controls you need, so nothing comes between you and your music or video. A new taskbar thumbnail with playback controls makes previewing easier and fun.