Everything About Fiction You Never Wanted to Know.

Monster Girl Quest: Paradox is the sequel to Monster Girl Quest, though it's not a direct sequel. It uses the RPG Maker VX Ace engine instead of a Visual Novel engine, and is set in an Alternate Universe to the original game.

The game starts in the same year as the original did, but with a twist. Thirty years prior to this, the Great Disaster occurred. This consisted of a number of strange and world-shaking events, the most notable being the disappearance of the Goddess Ilias. Needless to say, the entire world (monster and human alike) was stunned by this. Since then, monsters and humans have mostly decided to get along - a major departure from the original game.

Luka (the hero of the original game) has a dream of Ilias, the night before his baptism. She is apparently using all of her power to send him a message that things have gone horribly pear-shaped in the world, and hints that it's the reason for her apparent disappearance. Luka wakes up wondering what it means.

Of course, as in the original game, he nearly misses the baptism again, instead choosing to save a villager being attacked by a slime. But he now finds both Alice and Ilias (in childlike forms) fighting each other (and believing each is responsible for their respective Baleful Polymorph into childlike bodies). Finally, he receives one last message from Ilias during his baptism - that he's the world's only hope.

Unlike the last game, this is an actual roleplaying game instead of a visual novel with roleplaying elements. The game even has elements of Dragon Quest, Pokemon, and Suikoden incorporated into the gameplay mechanics, though it retains several Visual Novel like elements.

An English translation can be found here. 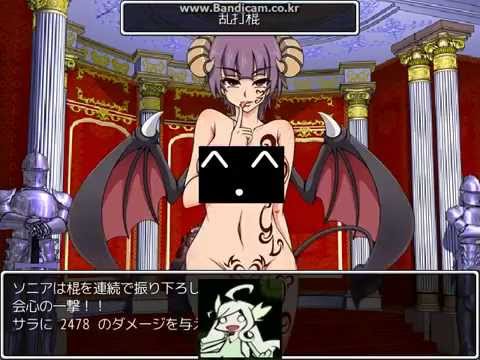