Civilization VI’s winter 2016 update is available today, adding one or two new features and a raft of balance changes for free. In addition, two new pieces of premium DLC – the first since the game’s launch in late October – are now available to purchase: the Polish civilisation, and the Viking scenario pack. Each will cost £3.99, or $4.99 US.

Civilization VI made our list of the best strategy games on PC.

The headline news is the reveal of Poland, led by King Jadwiga. Also known as Hedwig, she was Poland’s first female monarch, but was crowned ‘king’ because back in 1384 the title ‘queen’ denoted a ruler’s consort, and the Polish lords who hated her intended husband wanted to clearly indicate that she should rule.

The Polish ability is ‘Golden Liberty’, which allows them to gain territory when they build a fort or encampment, even allowing them to steal it from other civs. From the preview video above, it looks like this destroys enemy Wonders rather than steals them for yourself, though both outcomes are awful for your opponent. One of their military policy slots is also turned into a wildcard slot.

If you steal territory through Golden Liberty, Jadwiga’s leader ability will spread Poland’s religion to the city whose territory you stole. She also gets extra Holy Site adjacency bonuses, and bonus faith, culture and gold for religious relics.

The Polish unique unit is the Winged Hussar, which will push back defending units if it does more damage when attacking. Their unique building, the cloth hall, gives bonus production from foreign trade routes and bonus gold from internal trade routes. Poland will suit an expansionist playstyle and synergise with religious development, and sound pretty strong – Facebook and YouTube comments are already crying ‘OP’. 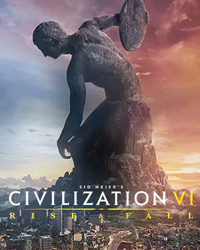 The Poland DLC also contains a scenario called Jadwiga’s Legacy, in which you defend Poland, Prague and Vienna from invading Turks and Teutonic knights.

Speaking of scenarios, the Viking scenario pack is Civ VI’s second piece of premium DLC and is also available now. It adds six new city-states and three new natural wonders to the game (including the Giant’s Causeway in Ireland and the Lysefjord in Norway). It also offers a new scenario called ‘Vikings, Traders, and Raiders!’, in which you can play as the Norwegians, Danes or Swedish and wreak havoc throughout Europe.

If you’re not interested in the DLC, you’ll still get the winter update for free. This adds a standard size Earth map, an ‘Alert’ state for all units (like that in Civ V, where they’ll wake automatically upon sighting an enemy), and a new replay option for Wonder movies.

Notable balance changes include cheaper overall production costs for Wonders and space race projects, but greater overall science and culture costs for techs and civics. All space race projects are now 40% cheaper, while Wonders get cheaper by era, from roughly 10% in the Industrial era to 40% in the Atomic era. Civics and techs, however, get progressivelymoreexpensive, from +5% in the Industrial era to +20% in the Information era.

And then there’s the usual host of AI tuning, bug fixes and visual/UI tweaks. The announcement and all update notes are available in full on the Civilization VI home page. If you’d like to pick Poland up, head here, while the Viking scenario is available here. Again, each will cost £3.99, or $4.99 US.