This is the Age of Empires II: The Conquerors Expansion Patch v1.0c. It is the latest patch available for the game.

The patch is available in the following languages:

Note that this patch also includes the content and fixes from Patch v1.0b.

This patch contains numerous bug fixes & play balance changes. Some of the fixes are not listed here. 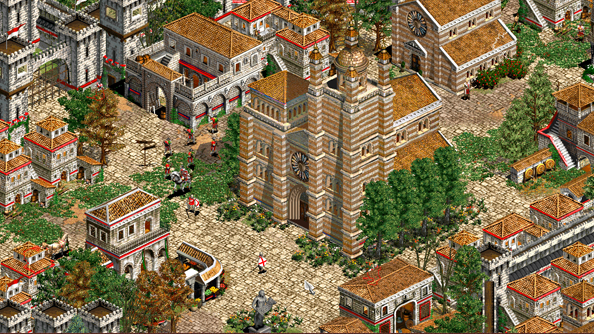 Open ground is always green on the minimap, even on snow or sand terrain.
Black Forest no longer turns up if you select Random Map or Land Random.
Farms can be queued to 40.
Fish traps now provide food at a faster rate, about equal to shore fish.
All archery range units (except hand-cannoneers) now do +1 additional damage to spearman-line units.
Camels are now as quick to train as spearmen.
Viking Berserks now move as fast as pikemen.
Celtic Woad Raiders now move faster (they run faster than Eagle Warriors who lack Squires).
Bombard Cannons do +80 additional damage to buildings.
New Multiplayer-only map type 'Blind Random'. This selects randomly between a number of different map types, and you are not told what kind of map you are playing on.
Aztecs now get free Loom
Castles now take 200 build points to construct instead of 150.
Franks now have the Halberd technology.
Chinese start with 50 less food than before (for a total of -200 food)
Bombard Towers now do piercing damage instead of normal damage (the major effect is vs. rams).
Byzantines get free Town Watch
Training time for Teutonic Knights, Longboats, Tarkans, and Samurai is significantly reduced.
Spanish hand-cannoneer and bombard cannons now get a 15% faster fire rate. Fire rate for conquistadors and elite conquistadors is also improved.
Cav archers now have equal range to heavy cav archers.
Goth infantry now gets its full cost discount in Feudal Age.
Japanese infantry now gets its full attack speed bonus in Feudal Age.